Cole was preparing his MBA applications and the University of Chicago Booth program was his top choice, so he wanted to make a trip up to Chicago to check out the downtown campus. At the same time, we thought it would be a great experience to see the Atlanta Braves play in another city. So when we found out the Braves were playing the Cubs at Wrigley Field in September, we knew that weekend would be the perfect opportunity to explore the city.

We took the first flight out on Saturday morning and flew into O’Hare; we hopped on the “L” and took the 45 min train ride. For those of you who may not be familiar with Chicago, the “L” is the elevated train that runs all throughout the city. We visited Chicago for the first time a few years ago and we stayed at a La Quinta in the financial district downtown. It was one of the nicest La Quintas I have ever stayed at with floor to ceiling windows and modern upgrades. So when Cole won a free night to stay at La Quinta at work, we knew we should use it in Chicago.

We dropped off our luggage at the hotel since our room wasn’t ready yet and ventured out. Right around the corner from our hotel, we found a bike station called Divvy. Divvy is very similar to BIXI, which I have written about in previous posts and since it is our favorite mode of transportation in a city, we hopped on the bike to explore.

We crossed the river and made our way over to Lou Malniti’s, one of the famous deep-dish pizzerias in the city. We ordered their lunch special, which included personal pizzas and salad. It was one of the best pizzas I’ve ever tasted. Even at 11 AM, the outside patio was packed, but we fortunately were able to sit inside right away. By the time we left around noon, there was a long wait of people dying to try this local favorite.

We continued to bike around the city and biked over to the Gleacher center (Booth’s downtown campus building) by the Chicago tribune building. The Gleacher Center is in the heart of downtown, located on the Chicago River and right by Magnificent Mile and Lake Michigan. If we had more time, I would have loved to take the architecture cruise, one of the highly recommended things to do in the city, which lets you see the beauty of the buildings via boat on the Chicago River. 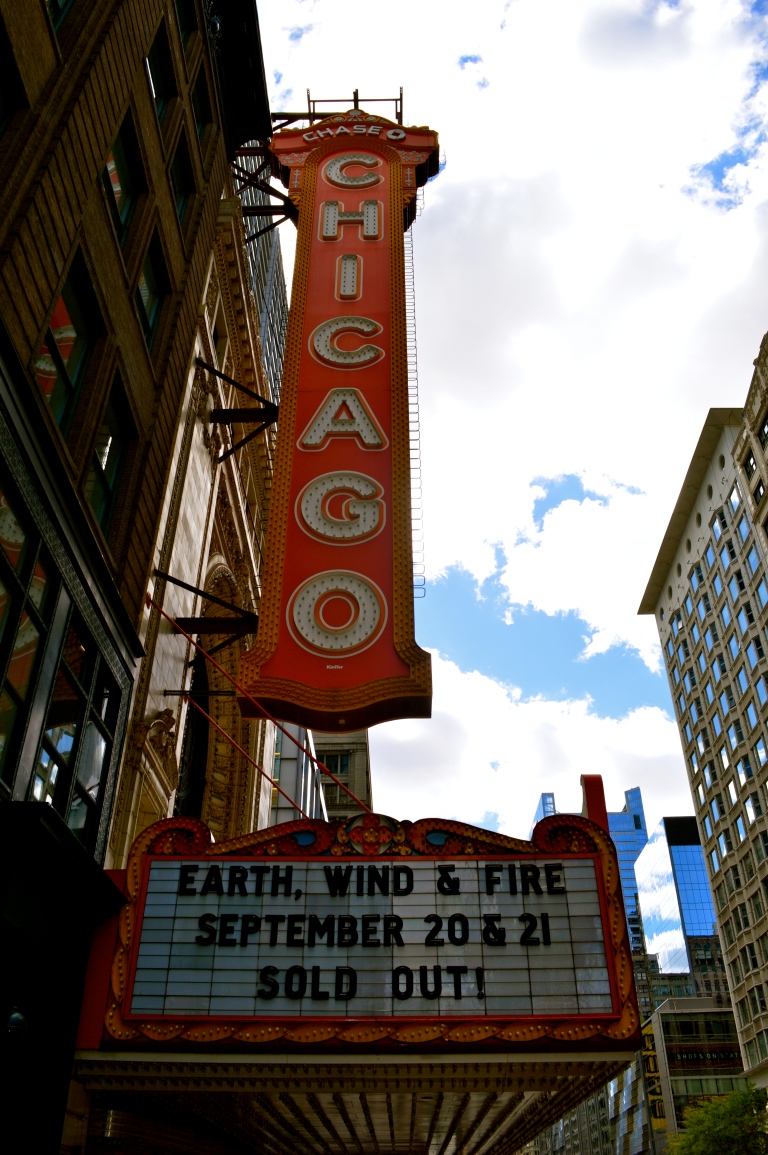 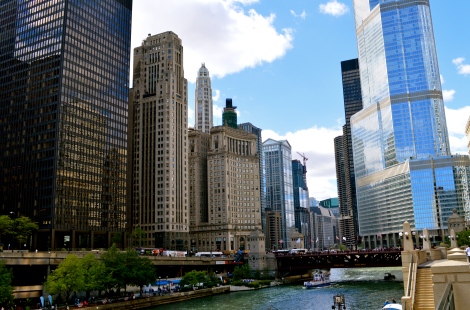 We walked along Michigan Avenue, AKA the Magnificent Mile, the location of many of the best stores and I window shopped. After peeking into the stores, we headed over to Navy Pier since we had never seen it. It very touristy and geared toward children so we quickly turned around and made our way up Lake Shore Drive via bike. Lake Shore Drive is a long stretch of road and bike paths that run the shoreline of Lake Michigan. It’s beautiful to see the contrast between the water and the skyscrapers. 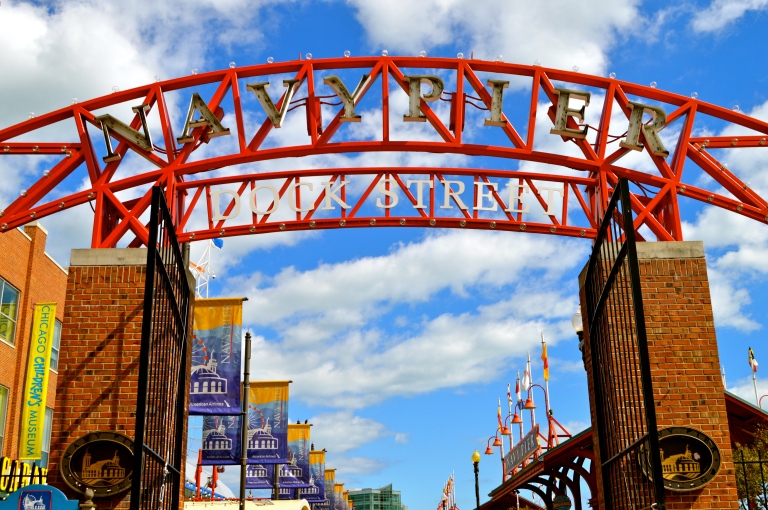 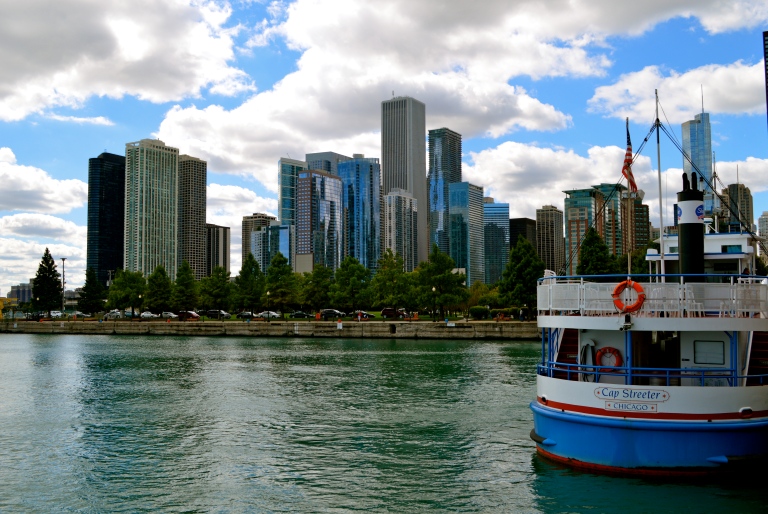 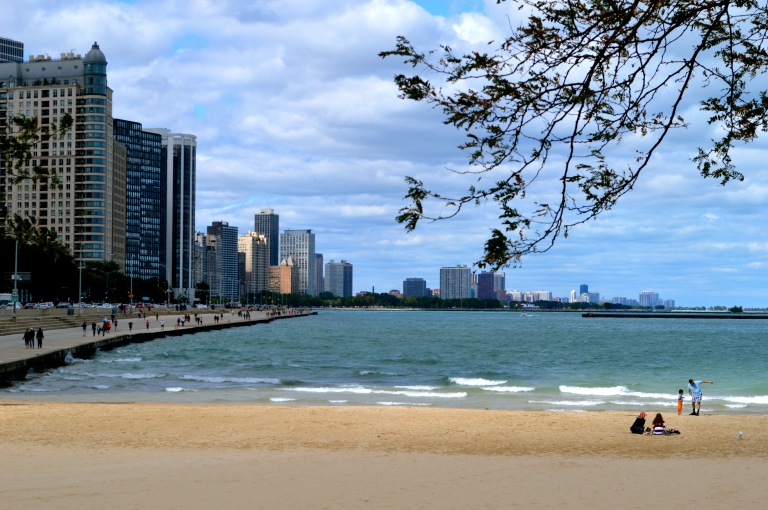 The baseball game was scheduled to start in a couple hours so we decided that we could bike the remainder of the way up to Wrigleyville. We biked the 5 or 6 miles via Lake Shore Drive and then cut over to Clark Street, which gave us a chance to see all the different neighborhoods.

After a little while we finally made it to Wrigleyville and grabbed a drink at O’Malleys, a bar that had a ton of televisions, which gave us a chance to catch the end of the UGA football game.

We eventually made our way into Wrigley Field in hopes to see the Braves clinch the NL East division. Despite the braves leading for 8 innings, the cubs broke away in the bottom of the 8th inning and the Braves couldn’t recover quickly enough. Despite the loss, I really enjoyed seeing Wrigley field – it is like stepping back in time and going back to when baseball first begun. There’s no jumbotron (at least not until next year) and there is a giant scoreboard where a gentleman sitting in the box manually updates the scores of the game. Also, instead of playing current hip-hop music, they utilize an organ for all the players’ songs and in between plays. One of the other cool things about the game was that many of the other bars and restaurants that overlooked the stadium had rooftop bleacher seats where people could watch the game. Also, they have phenomenal Chicago Hot Dogs and beer! I highly recommend watching a game at Wrigley Field if you ever find yourself in Chicago. 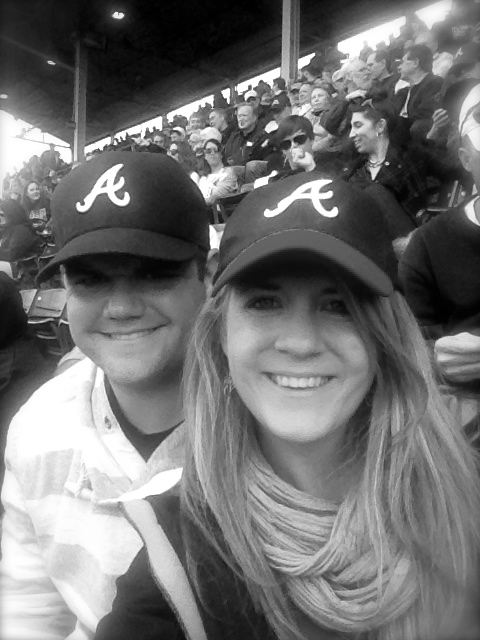 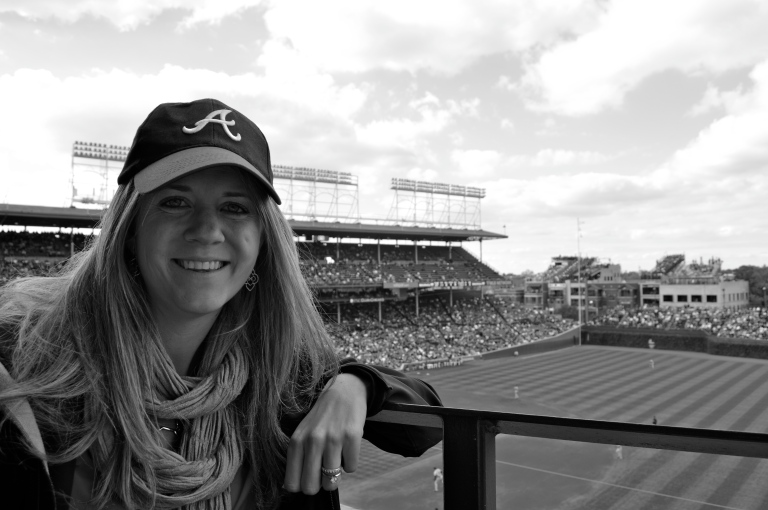 After the loss, we decided to grab a coffee since it was getting cold after dark and then found a bar to soak in the Wrigleyville atmosphere. The neighborhood was crowded with young people everywhere who were celebrating the cubs’ win. We grabbed a couple beers at this bar called Casey Moran’s – it had everything you could want and more – a rooftop bar, a Biergarten/patio vibe and some of the best music so you can dance the night away. We alternated between watching football and people watching and I loved the atmosphere and vibe of the place.

After hanging out there for a while, we decided to head back into Chicago. We took the “l” again, but this time it was packed full of drunken cubbies fans. What an experience. We decided to go check out Millennium Park at night and took some quintessential bean photos. We then got back on our bikes to explore a bit some more. We made our way all over town – stopping in a few bars along the way – my favorite being Public House off State Street – and also picked out some restaurants for our next trip – Quartino, Hub 51, RPM and many more. Unfortunately we weren’t hungry so we just decided to try them next time. After a long day, we biked back to the financial district for a good nights sleep before a 5 am train ride to the airport. 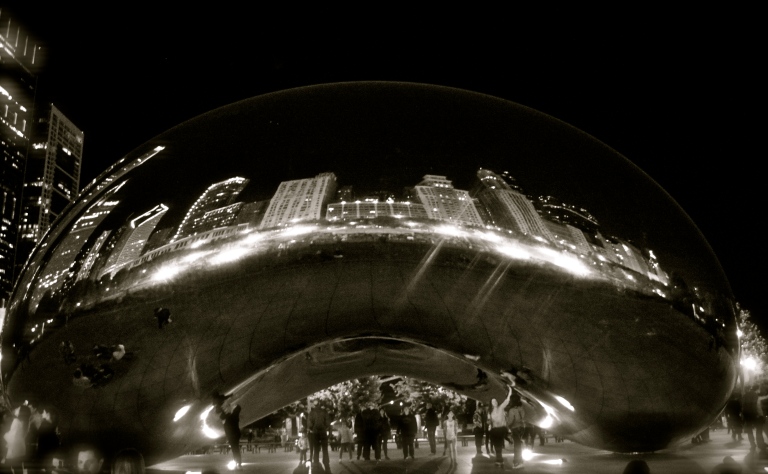 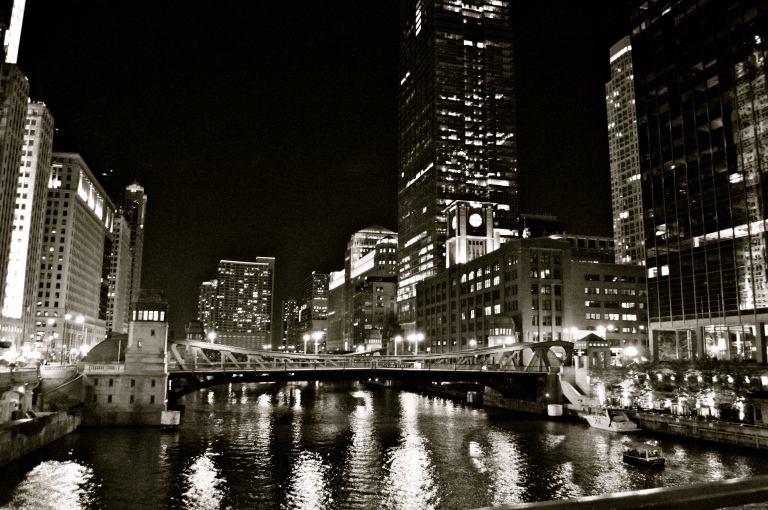 Since  Cole will be starting at Chicago Booth in the spring 🙂 we will be visiting Chicago a lot more in the future and look forward to posting more about our adventures in this beautiful city!