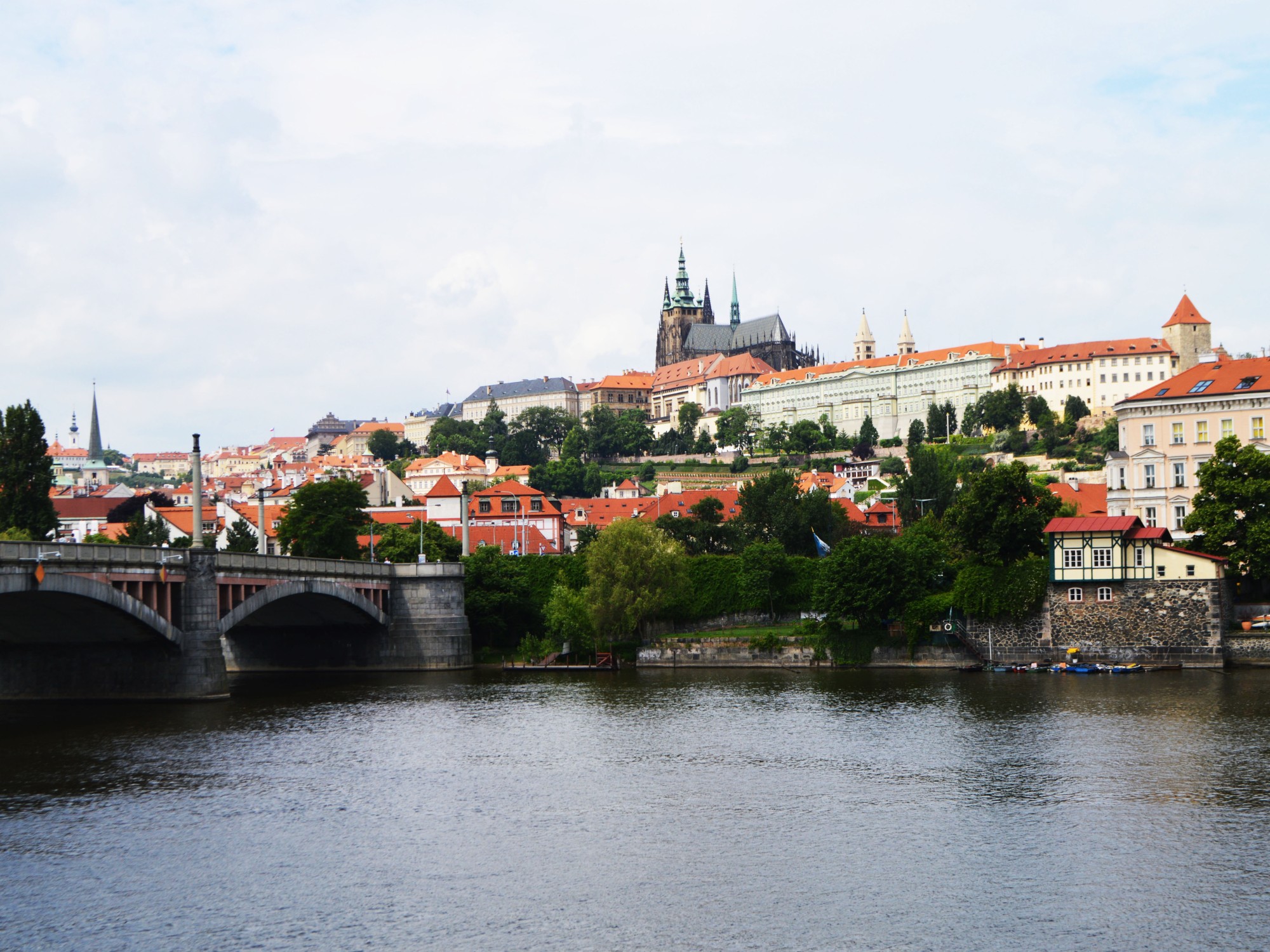 We’ve heard so many wonderful things about Prague from many different people that we added it to our bucket list of cities to visit. We booked a weekend trip and were all set to spend a couple days czeching out the city 😉

We landed Friday evening after a short flight from Amsterdam and the easy public transportation got us into downtown Prague in 45 minutes for 1 euro! We stayed at the beautiful InterContinental Prague, right in downtown and just a few blocks from Old Town Prague. Friday evening we found an authentic Czech restaurant called Mincovna right in the heart of Old Town. We feasted on sausages, Prague ham wrapped asparagus, schnitzel and flank steak – and of course, two Pilsners Urquells. Prague is actually where the Pilsner beer was invented, the type of beer which now accounts for 2/3 of worldwide beers made! We finished up the evening at a nearby Irish bar watching the first games of the Euro Cup. 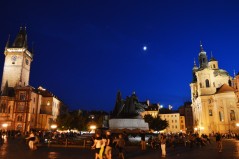 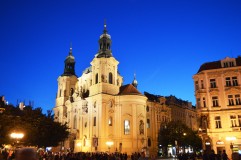 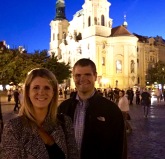 Saturday we explored the entire city – we were lucky enough to have one of our friends in Amsterdam who is from the Czech Republic provide us with a list of great recommendations that we closely followed (thanks Kat!). We started the day by heading south along the river and then east where we stumbled upon an incredible bakery called Breadway, which legitimately had the best bread we’ve ever tasted. We actually originally planned to do a food and beer tour on Saturday, but unfortunately by the time I tried to book one, they were all full. However, the amazing guys at Taste of Prague kindly shared a sample itinerary with some of their recommendations. We decided to have our own mini food tour and stopped at many of their recommendations throughout the weekend. Our absolute favorite was Nase Maso Butcher Shop where we had an incredible burger and some mouth-watering meatloaf. Right next door was a restaurant called Sisters that serves Chlebicek, a local Czech favorite that is basically an open faced sandwich. I tried the roast beef, celery and fried onion that was delicious! 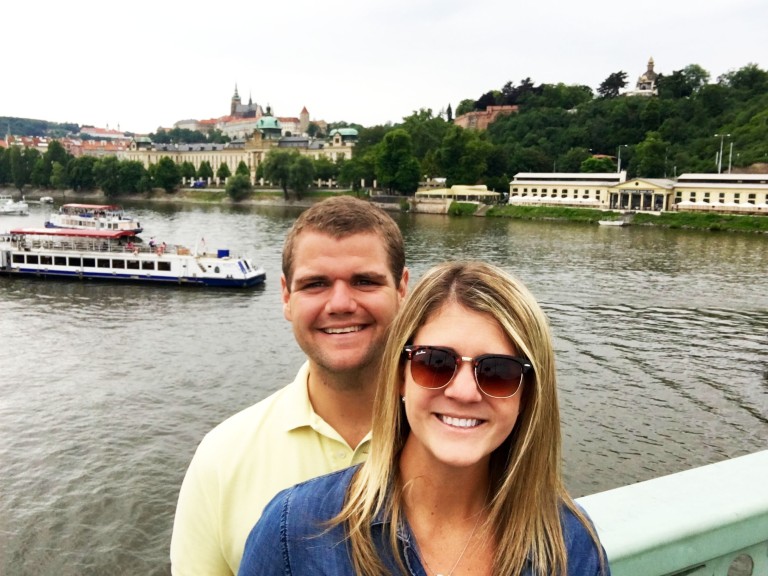 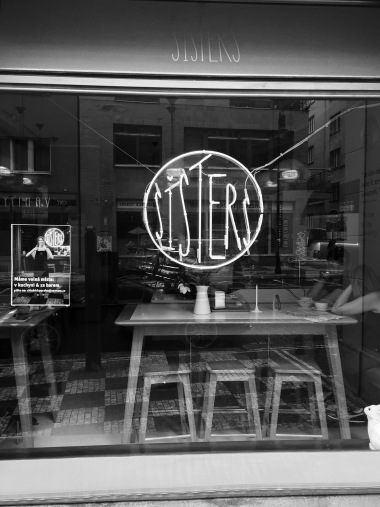 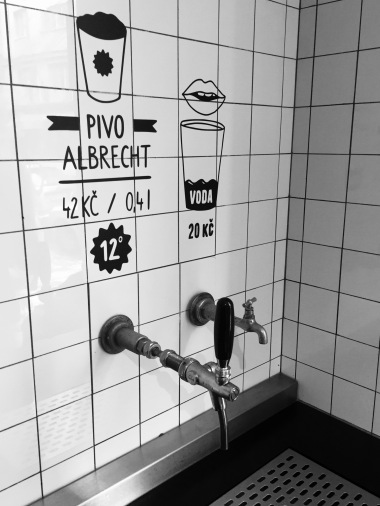 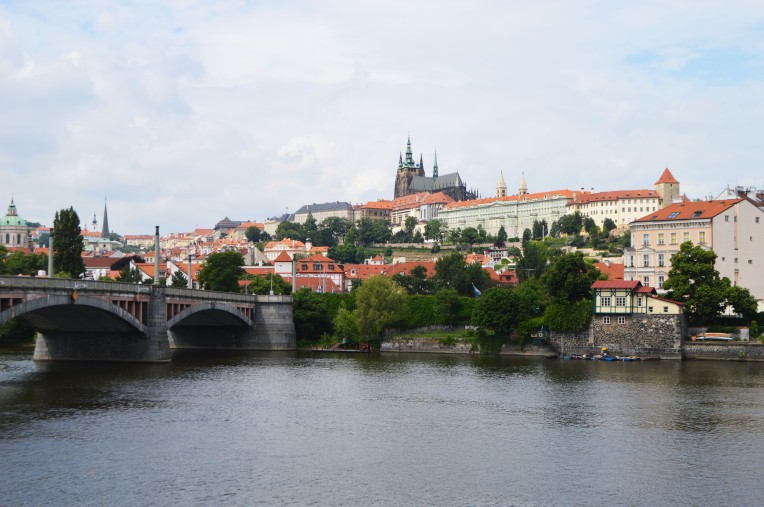 View of the Vltava River and Prague Castle 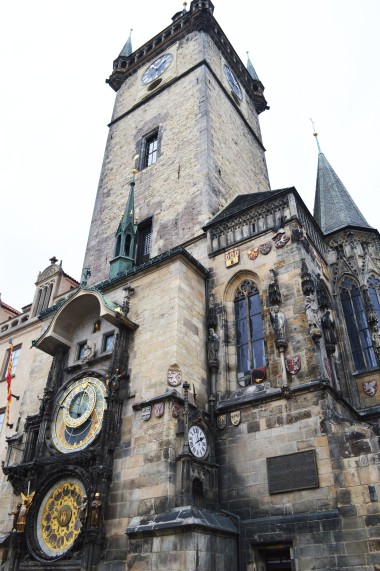 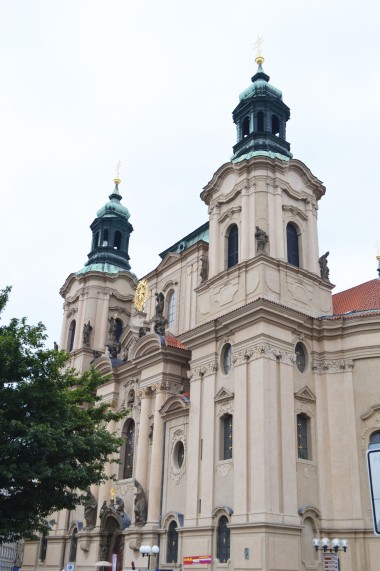 After our food coma, we stumbled upon Bakeshop where we grabbed a couple of lattes and vowed to come back to try their delicious pastries the following day when we had more room in our bellies! At the top of the hour, we stopped by the Astronomical clock (the oldest astronomical clock still working – it was built in 1410!). We then headed across the river, where we wandered through Letná, a huge park at the top of a hill that offers an incredible view overlooking the city. We grabbed a couple pilsners at the beer garden on the north end and then headed back down south to explore the Prague Castle and the St. Vitus Cathedral. Fun fact – the Prague Castle is the largest ancient castle in the world! 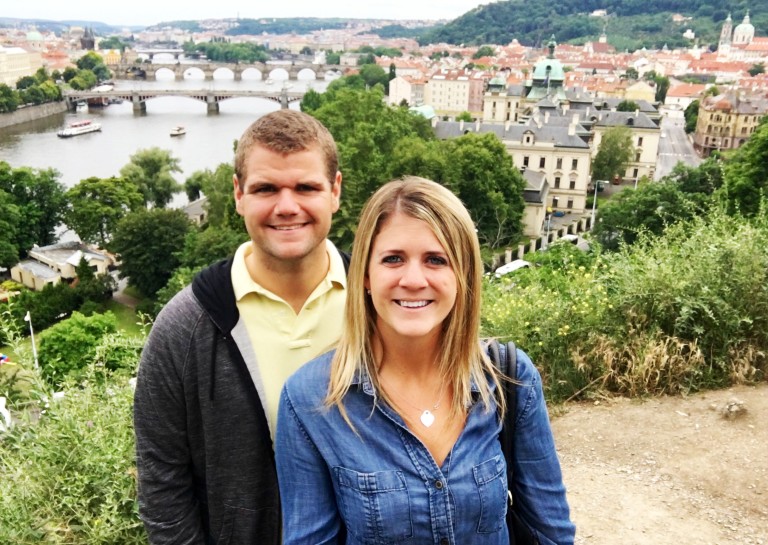 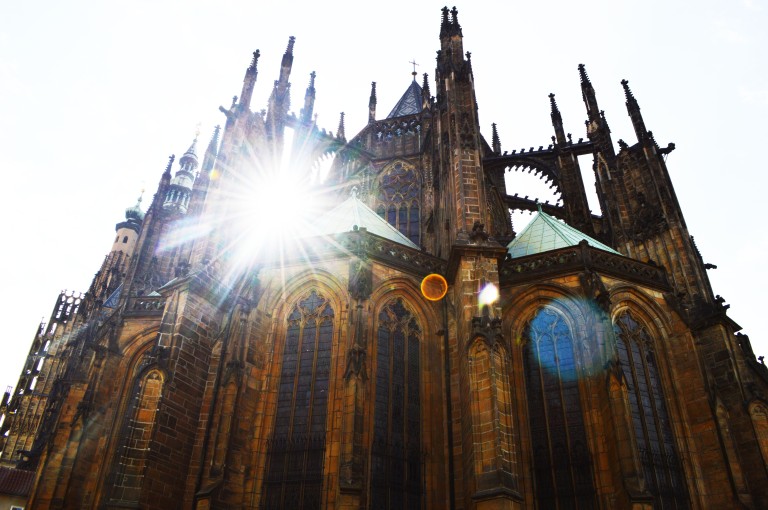 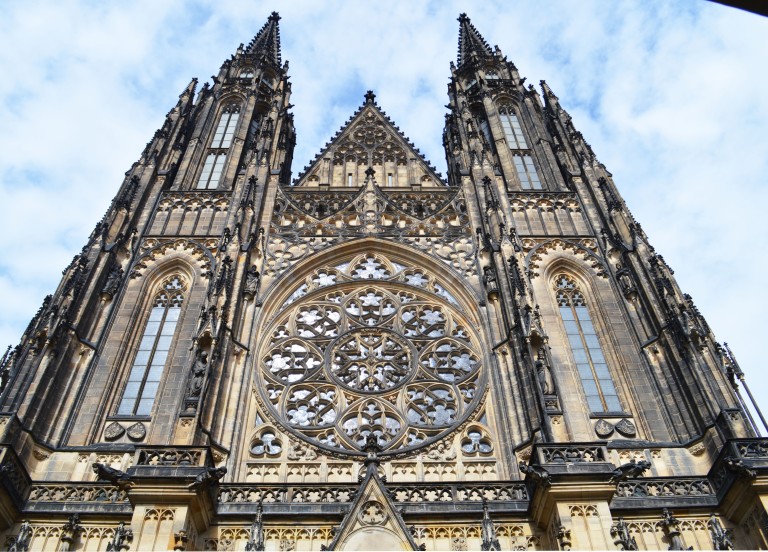 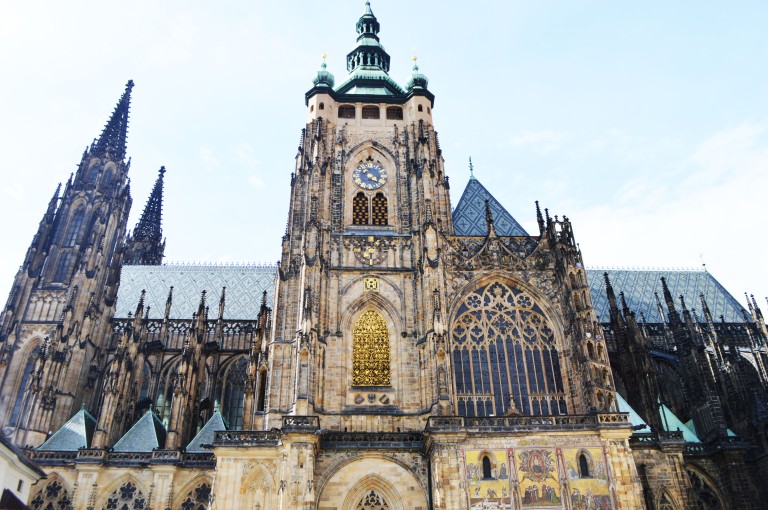 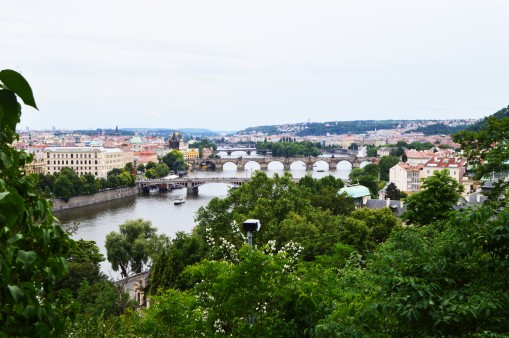 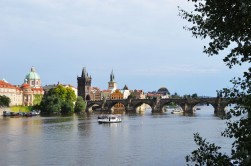 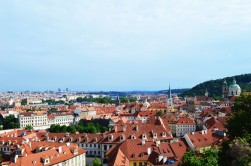 We went back to the hotel to freshen up before dinner and then continued our food tour by grabbing Mexican at Las Adelitas in Old Town. Now that we’ve been living in Amsterdam for almost a year, we both desperately miss good Mexican food from back home. When our friend told us about a great authentic restaurant in Prague, we knew we had to try it and was wonderful. The margaritas were amazing and all the food was authentic and delicious. I think they even had fresh, homemade chips which is basically unheard of in Europe. All they were missing was queso and it would have been perfect.

We then headed to The Dubliner to watch the England Russia game and we had no idea what we were getting ourselves into. I thought UGA knew how to party during a sporting event, but this was unlike anything I had ever seen. The bar was located underground in almost a cavern which was legitimately 30 degrees warmer then the top floor. Cole and I decided to plant ourselves right in the middle of the action among the big crowd. Halftime consisted of England and Russian fans singing along to music at the top of their lungs and shouting chants. But the best part was when England scored – the crowd literally lost their minds: they ripped off their shirts, threw up their beer GLASSES in the air and begun chanting cheers. I was honestly in such shock and trying to avoid the glass being thrown and shattered around me that I couldn’t even capture a photo of it. While the game ended with a last second goal by Russia which was a bit depressing, watching the game alongside some true fans was a lot of fun.

Sunday was our last day of Prague and we decided to spend it exploring a bit more along the water. We first stopped by Bakeshop and followed through on our promise where we had their scrumptious cheesecake and some coffee to get the morning started. As we headed down to Charles bridge, we shared a Banh mi bo from Bahn-mi-ba, which was great. We walked along the water and then listened to some music played by local artists on the Charles bridge. We spent some time on one of the nearby islands watching the paddle boats, ducks and swans go by. We then continued south until we reached the river bank of Náplavka and then finally headed back north to try some more traditional Czech food. We stopped at Lokál U Bílé kuelky in the neighbourhood of Mala Strana, where we tried their Pilsner Urquell, which is known for its outstanding tank draught beer. We tried their local butcher sausage and fried cheese with tartar sauce (both amazing!) with some potato dumplings. We finished our food filled weekend by stopping at a place called Good Food to try the Czech pastry, trdelník. Trdelník is wrapped dough that is grilled and topped with sugars and walnuts and then filled with your choice of topping (in my case – chocolate and strawberries). 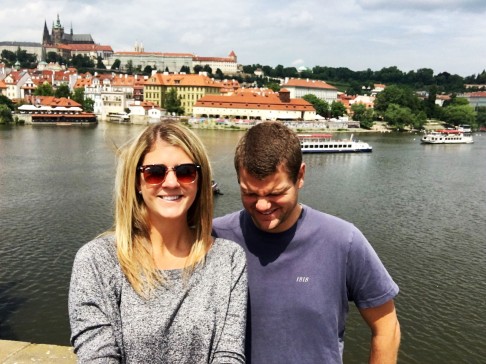 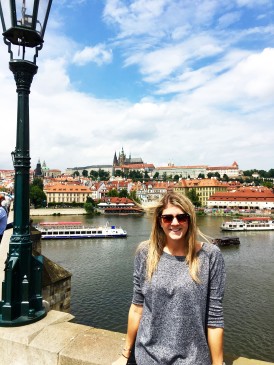 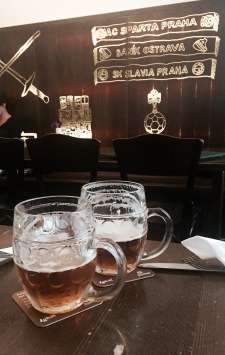 Enjoying the pilsner at Lokal 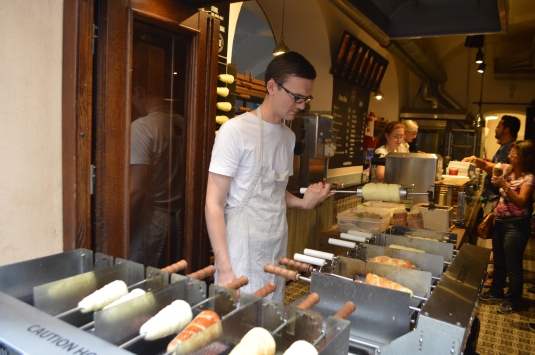 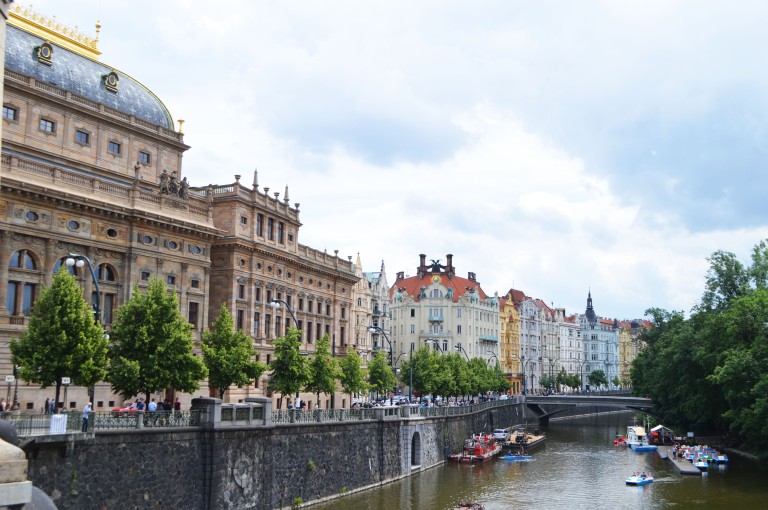 As you can probably tell from this post, Prague is known for its beer and food – I think it’s safe to say we successfully “czeched” off a lot of the cities’ best establishments. However, more important than the culinary success of the city, is the beautiful architecture that is abundant in the city. As soon as we set foot in Old Town on our first night, I knew there was something special about this city. I hope some of these pictures highlight just how gorgeous this Praha is and inspires you to visit the city!

Till our next adventure..