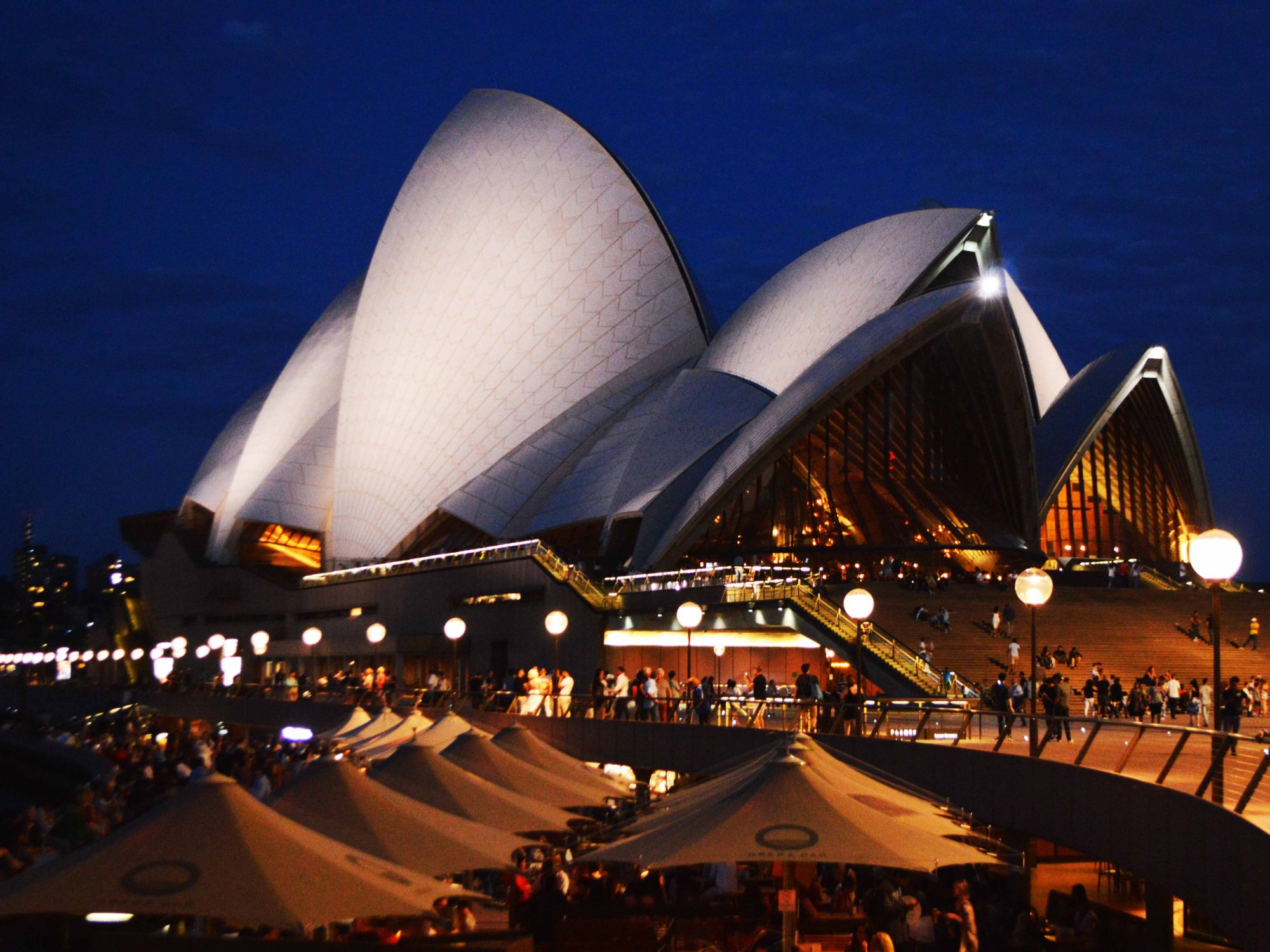 After planning Cole’s 30th birthday trip for over a year, it was finally time we headed down under for two weeks of exploring Australia and New Zealand! After flying on the world’s longest flight – Doha to Auckland – we arrived in Sydney early Sunday morning on Cole’s birthday! 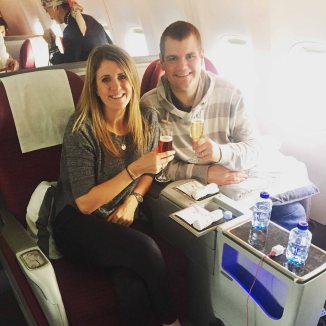 We took a quick train into town and checked into our hotel, the beautiful InterContinental right in the Harbour Quay. We freshened up after 30 hours of flying and headed out to enjoy the gorgeous day. We hopped on the ferry and made our way to Manly beach. The ferry ride was incredible – looking back over the bridge and the Harbour was a great way to get a first taste of the city. We grabbed some snacks and wine at the store in Manly, and walked through town over to the beach. We soaked up the sun and hung out with locals and tourists alike enjoying the weather. After a couple hours in the strong sun, we decided to walk along the boardwalk – watching a small surfing competition and grabbing a coffee to fight the jet lag before stumbling upon some live music.

We then headed back on the ferry to get ready for Cole’s birthday dinner! We stopped by the Opera House before heading over to Gowings, a stylish restaurant I made reservations at which is located in a boutique hotel. If you decide to check it out, you must try the truffle mac and cheese side dish! 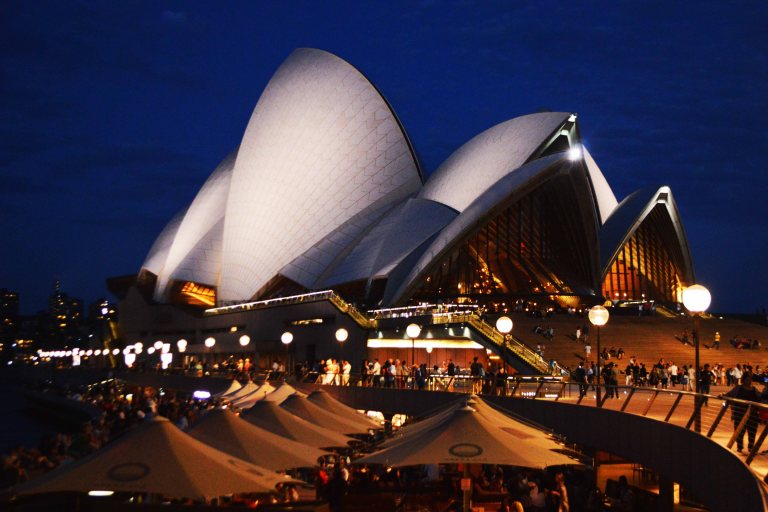 On Monday, we went for an amazing run across the Harbour bridge – it wasn’t a very successful run as I stopped every 5 minutes to take in the view, in awe at how beautiful Sydney looked. We ended up in Kirribilli, a suburb across the water which overlooks the Opera House, the Quay, and the bridge. If you’re a runner, I highly recommend going this route as the views are worth the hills you encounter. After our run, we headed over to Bondi Beach. We grabbed a delicious lunch and coffee at a cute beachfront cafe and then started our Bondi to Coogee walk. The “hike” only takes a couple hours and offers some gorgeous views of the coast line. We ended at Coogee Pavillion, one of the coolest restaurants ever. It’s located right on the water, has great food & drinks, an awesome atmosphere but also has ping pong tables and games. We spent a couple hours here relaxing over some beers and playing some cards. When we worked up enough energy to move again, we walked a bit around Coogee before heading back over to Bondi to check out this restaurant I heard amazing things about – Da Orazio Pizza and Porchetta. I tried their infamous porchetta sandwhich while Cole got a pizza. After dinner, we walked around a bit and then made our way back to the hotel to have a relaxing night.

On Tuesday, as a result of some terrible weather, we took an unexpected trip which I will post about separately!

On Wednesday we were back in Sydney and fortunately the weather turned out to be better than expected. We went for another run, this time around the botanical gardens heading over to Mrs Macquarie’s chair – a bench carved out of sandstone at the most northern point of the gardens. The bench isn’t anything to write home about but the location of it offers beautiful views looking back on the bridge and opera house. We decided to get a taste of some of the other parts of Sydney and headed over to quickly check out The Rocks, the oldest part of Sydney right next to the Quay. It was a bit touristy but nice to pass through.

We then headed over to Surrey Hills, this incredibly charming neighborhood where we had a delicious lunch at Ouroboros – an organic restaurant that serves up some fresh and tasty food. We walked around the rest of the neighborhood falling in love with the quaint streets full of restaurants, each one cuter than the last. We then headed to Newtown, this funky hipster neighborhood, which was good to see but not our favorite. I then convinced Cole that we needed to do another ferry ride so we headed back into town and hopped on the ferry to Watson’s Bay, this quiet but affluent seaside town. We grabbed drinks and a snack at this adorable Greek restaurant before heading back on the ferry right at sunset.

For our last day in Sydney, we decided that we really wanted to experience some of the wildlife Australia has to offer. However, we didn’t want to see the animals in a zoo so after some research, we read about a clearing on the foothills of the Blue Mountains where you can find wild kangaroos grazing early in the morning. We woke up at 5 in the morning, I packed and checked out of the hotel while Cole rented a car. After an unexpected detour across the harbour bridge, Cole made it back to pick me up from the hotel and we were off to have “breaky with the roos!”. It was pouring but we were hopeful that it would lighten up by the time we made it to Euroka clearing. We stopped an adorable cafe to pick up some breakfast and headed into the park. Unfortunately, after a couple miles into the park that surrounded the clearing, we reached a sign that stated due to flooding the road was closed. We were heartbroken but determined. We looked up online how much farther we had, but once we realized it would mean a couple mile trek in the rain, we knew it wasn’t the best idea. We abandoned hope of seeing the wild kangaroos, we decided that since we were so close to the Three Sisters, we might as well check it out. We knew there was a chance that due to the weather, we may not see much, but we didn’t quite anticipate the sight (or lack thereof) once we made it there. After a short walk, we decided to hop back in the car and head towards Sydney.

When researching wild kangaroos, we had read about Featherdale Wildlife Park, which sounded like a more interactive and smaller zoo. In reality, it was basically a glorified petting zoo, but after failing to see the roos in the morning, we were determined to at least see some of the wildlife before we left the country. Fortunately, by the time we arrived at the zoo, the weather was just starting to clear up and before long, it stopped raining completely (although not before we got wet enough to look like wet dogs haha). We spent a couple hours petting some of the kangaroos and wallabies. The timing of our visit was perfect as the koalas woke up from their naps to eat lunch. Overall, our trip to Featherdale was a good opportunity to see some of Australia’s diverse wildlife.

Before heading to the airport to catch our flight to New Zealand, we made one final stop – at Outback Steakhouse! It was quite funny to be drinking a Foster’s beer in Australia and eating a bloomin’ onion (which btw they fly in from America because the local onions are too small haha). That evening, we caught our flight to Wellington, New Zealand to start the next part of our adventure!