We heard wonderful things about the beautiful city of San Francisco, however, most weekends the flights are packed full so for the past year we waited patiently to get a chance to visit.

We got our chance one weekend in late October and flew out Friday night.  We arrived early and checked into the Hilton Union Square. The hotel was located right off O’Farrell, in the heart of downtown.

One of my college roommates, Abbey, relocated to San Francisco after college and I hadn’t seen her since I graduated. I called her as soon as I landed and we quickly made plans to meet up. She met up with us and we walked all over the town. We started down Market Street, one of the main streets running from Embarcadero (Port of San Francisco) cutting southwest through town. It’s the location of many stores as well as the cable cars ending point. We walked along Market until we reached the Port of San Francisco and then headed north, walking along the water on Embarcadero. We eventually headed back into town towards Telegraph Hill. We finally ended up in the neighborhood, North Beach, also known as Little Italy. We ate dinner at a little Italian restaurant right in the heart of North Beach and enjoyed sitting outside and taking in the city and its eclectic people. It was wonderful spending an evening with an old friend and catching up. 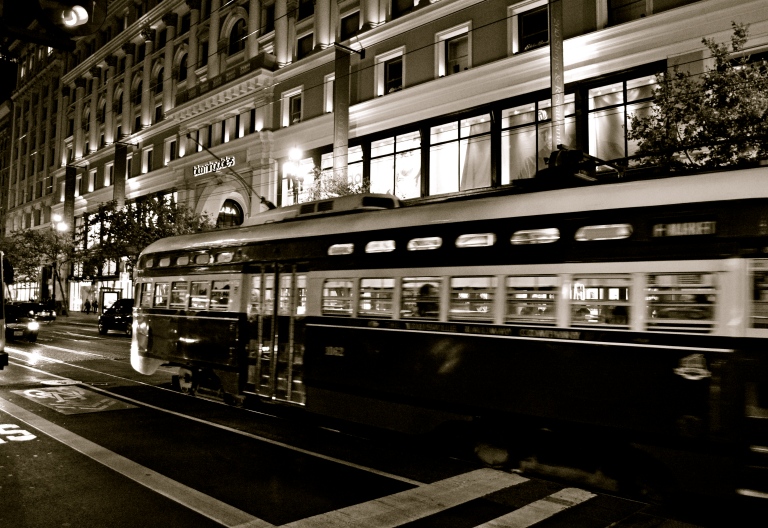 Saturday morning we woke up early hoping to bike across the Golden Gate bridge. We headed into Union Square, a plaza complete with upscale boutiques, art galleries and department stores. After a quick peak around, we were excited to see a bike share program similar to other cities, called Bay Area BikeShare. We hopped on the bikes using the station located in Union Square and biked down Market down to 2nd street eventually making our way to the San Francisco Giants baseball stadium. AT&T Park is one of the coolest MLB stadiums I’ve seen. Its location is right on the water with views of Bay Bridge and a marina next door. We walked down the pier taking in the beautiful sight and then hopped back on our bikes. 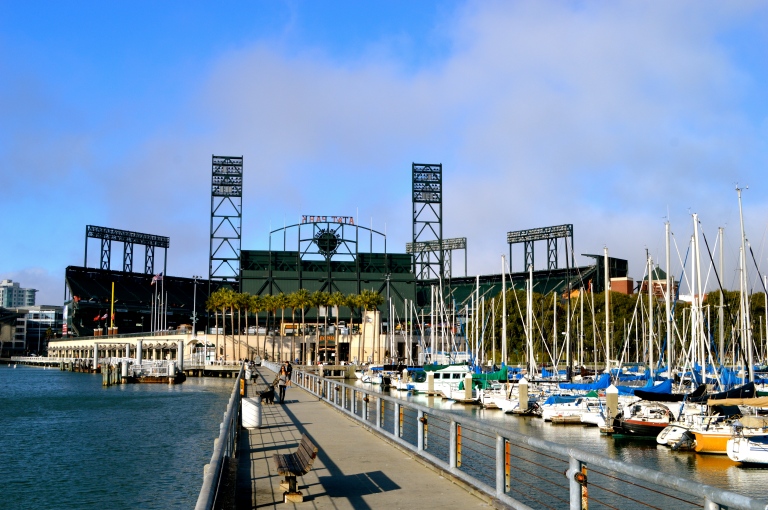 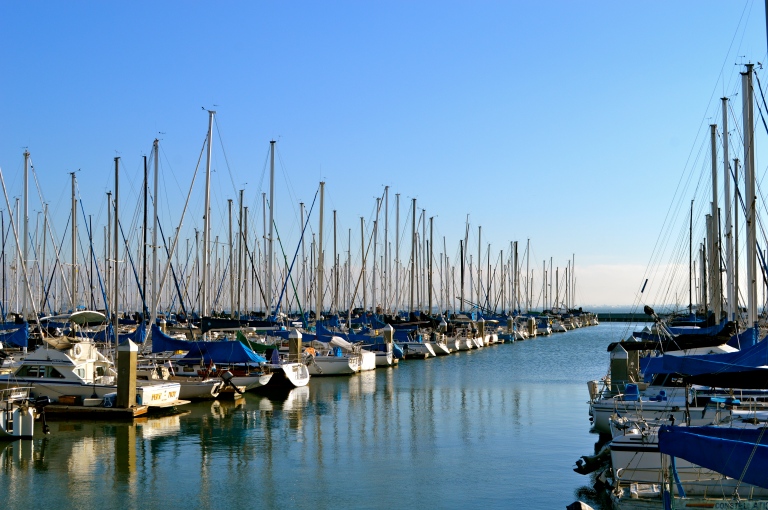 We continued biking along the Embarcadero, enjoying the gorgeous views of the Bay Bridge and the wonderful weather. We eventually made our way to Fisherman’s Wharf. Since it was still early in the morning, it was very quiet and serene. We walked around a bit, stopped into Boudin Bakery for some fresh sourdough bread, and said hi to the seals catching some rays on the docks.

Unfortunately, we jumped the gun a bit too early and didn’t look too much into the map of the Bike Share. We were hoping to use these bikes to get across the Golden Gate and explore Sausalito, supposedly a picturesque neighborhood across the Bay. The Bay Area bikes only operate in a very limited area and basically in only one part of San Francisco, between Market & Embarcadero. Our assumption was this small area to use the bikes was to help keep in business all the rest of the local companies that charge ridiculous prices to tourists to cross the bridge. Unfortunately, since it was still early morning, the fog hadn’t quite cleared and you couldn’t even see the Golden Gate bridge. We decided it wasn’t worth the bike ride in the morning and we would try again later in the afternoon.

We wandered around Fisherman’s Wharf a bit more and stopped in Ghirardelli Square before heading over to the most crooked street in the world, Lombard Street. This famous street, which includes 8 steep turns, has been featured in many movies, advertisements and television shows. We were able to see the lovely neighborhoods of Cow Hill and Russian Hill.

We then took the cable car down into Market Street and headed over to the Mission. As it is known formally, The Mission District, is located just a few miles outside of downtown San Francisco. We walked to the Mission neighborhood from Market, but highly recommend you consider taking a taxi or public transportation. The walk from downtown goes through some rough parts of town, including your share of crazy ladies screaming at pigeons and people passed out in the middle of the day. Once you cross into the more urbanized part of Mission District, you will find an abundance of taquerias, restaurants, and little artsy stores. We watched the Georgia-Florida game at a pub, The Phoenix, based off of another one of Cole’s colleague’s recommendation.  We enjoyed a snack at one of the taquerias, El Toro, which had some delicious authentic Mexican food.

After enjoying the Mission, we made our way back downtown to Market and took the cable car back down to Fisherman’s Wharf to walk around the marina a bit more. This time we were lucky enough to have a beautiful view of the Golden Gate Bridge. We walked through the parks and streets of the Marina District and finally stopped to enjoy the sunset over the bridge. We spent about an hour just taking in the picturesque view. 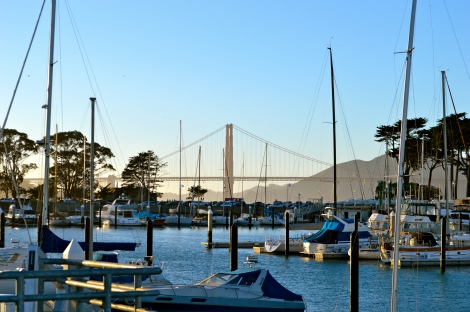 Afterwards, we biked back towards AT&T Park and stopped at 21st Amendment Brewery. We passed by the brewpub earlier that morning and wanted to check it out. The place was packed with locals and I tried their famous watermelon wheat beer, which was delicious. The food at the brewery was decent, but the beers and atmosphere of the place outweigh any negatives. Abbey and her roommate met us there and it was great to spend a bit more time together.

We flew back on the redeye that night and despite the short trip, we really enjoyed our time in San Francisco. The weather, beautiful views, and the fact that you could easy get around to explore the town made the trip very enjoyable. I am looking forward to visiting the city again and checking out some of the neighboring areas.